Ashbourne is the southern gateway to the Peak District and is situated in a sheltered green valley. It has a traditional market square which has a number of cafes, shops and pubs around. There is a cobbled street and the relaxed atmosphere seems that little has changed in the town over the years.

Ashbourne has an impressive church befitting its market town status. St Oswald's Church dates from the 13th-14th century on a site of a former saxon church, but there were some major renovations in the 19th century. One notable monument within the church is the Boothby monument dedicated to Penelope Boothby, a member of the influential local family who onec owned Asbourne hall, which was once an impressive Georgian mansion.

Some of the buildings near the church seem very old and Ashbourne does have a large number of listed buildings.

Another notable feature of Asbourne is a wooden beam across the street. This was once used for advertising and these beams were once a common feature in a lot of towns, but have mostly been removed over the years.

Ashbourne is also the starting point of the Tissington Trail, walk, which follows the path of the disused Asbourne to Buxton railway and is a popular walk.

Ashbourne is also well known for Royal Shrovetide Football, a game of football when half of the town play the other half. The names of the teams are Up'ards and the Down'ards and the game can be quite rough and is a traditional game that as the name depicts has royal connections 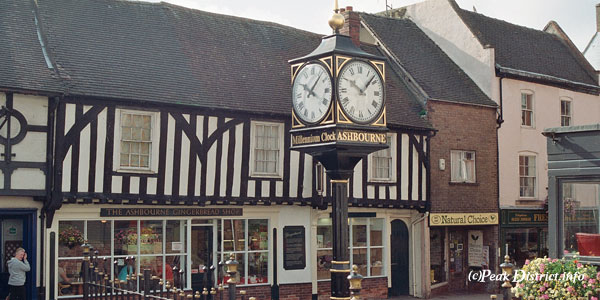