Castleton is 10 miles North West of Buxton and is at the northern boundary of the White Peak area. It is a small sheltered village surrounded by hills with traditional cottages. It is located in the shadow of Peveril Castle as pictured below that was named after William the Conqueror's illegitimate son William Peveril, who built the first castle here in 1170.

Although it is not very big, Castleton has quite a number of cafes that cater for the steady trickle of visitors There is also a visitor centre to get detailed information on the local area, caves and walks. 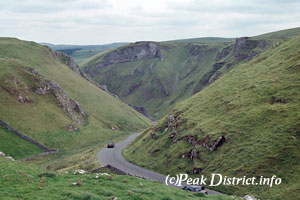 The approach to Castleton from the West takes you through Winnats pass (No buses or large vehicles) which is part of the National Trust High Peak Estate. It is a beautiful dramatic road that is used in the Tour of the Peak cycle race each year. Just after the pass is Speedwell Cavern, one of four caves being open to the public in the area. One of the other popular caves is Peak Cavern